A large landscaping campaign has begun in Turkmenistan 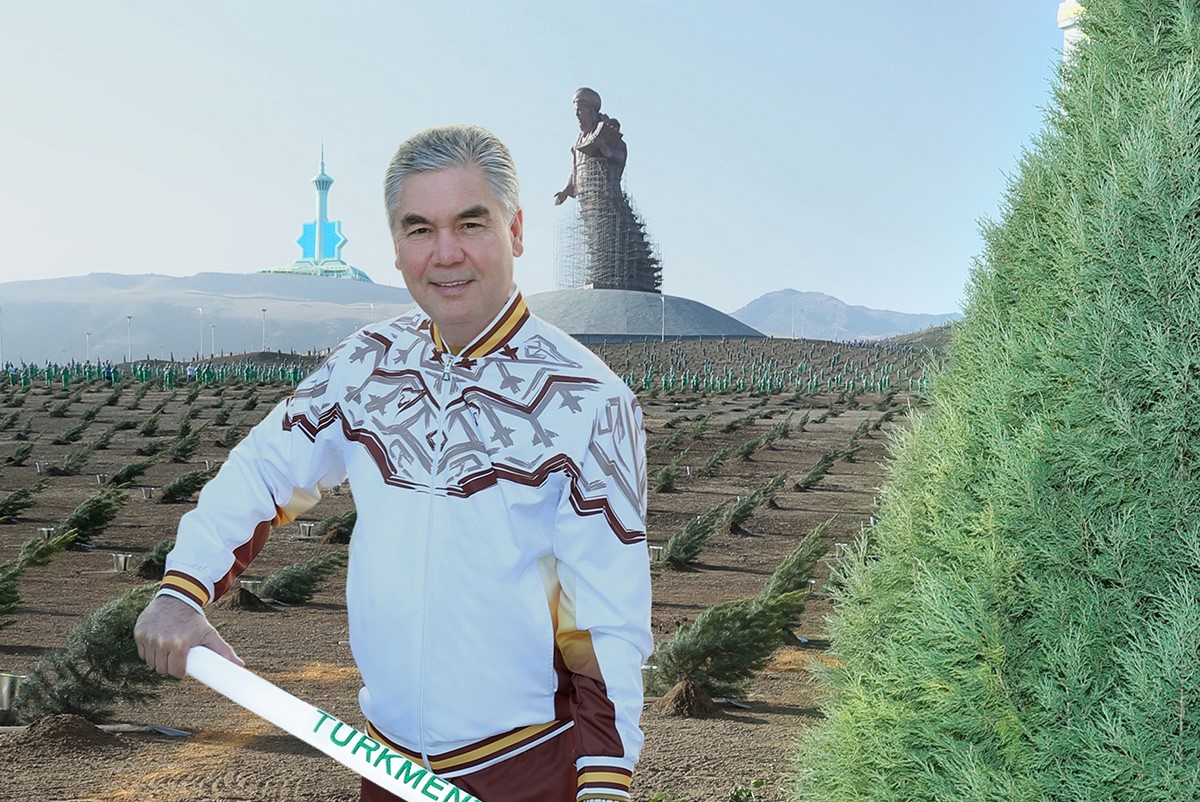 On November 6 in Turkmenistan with participation of President Gurbanguly Berdimuhamedov the next stage of the large scale tree planting campaign providing expansion of «green belts» round cities and villages of the country took a start. The head of the state gives particular attention to realisation of this grandiose program in which almost all population of Turkmenistan is involved, as an important factor of creation of comfortable conditions for high-grade life and rest of people. "Turkmenistan: Golden Age" resource reports.

Early in the morning numerous participants of the action gathered in territories of 13,5 hectares of land in the southern part of the capital in the cultural-park complex of Makhtumkuli Fragi, at the monument extolled to skies.

Issues of accomplishment of the territory of this complex created in honour of the great poet-thinker, its afforestation, transformation into a blossoming garden and, thus, preservation of high level of ecology in the central city of the country are in the centre of attention of the leader of the nation.

It is necessary to note that on October 26, the current year President Gurbanguly Berdimuhamedov made a working trip of the southern part of the capital where he familiarised with the work, which entered the finishing stage round the cultural-park complex of Makhtumkuli Fragi.

Then the leader of the nation noted expediency to carry out here the autumn season of mass tree planting that will promote maintenance of ecological well-being of this natural corner, and gave concrete commissions to corresponding executives.

Speaking of the important role of parks and squares in the life of modern cities and townspeople and a functional value of green zones in the urban environment and their floristic design, the leader of the nation places an emphasis on their ecological mission to serve as the city’s "lungs" and to be a vacation spot where in cosy, quiet and aesthetically attractive conditions one can breathe the fresh air.

From the top of the platform at the pedestal of the grandiose monument to Makhtumkuli Fragi erected at the foothills of the Kopet Dagh as if on one’s palm, the wonderful white marble-coated capital is visible. In recent years, the shape of the chief town of our country has transformed beyond recognition. All it is the visible evidence of successful realisation of transformative programs of President Gurbanguly Berdimuhamedov on development of Ashkhabad. Modern buildings, harmoniously being combined with natural features of this corner, create a bewitchingly beautiful picture.

… The Presidential car approaches the place where the national tree planting campaign should start. Numerous participants welcome the leader of the nation.

All are ready to join the action in the place allotted for planting various saplings. The festive mood and enthusiasm of the gathered was increased by musical compositions sounding here on verses of Makhtumkuli, our national pride. It is possible to tell without exaggeration that today in all corners of the Turkmen land a big festival - a bright symbol of indestructible unity and consolidation of people, its invariable fidelity to ideals of peace, good and creation was developed.

Warmly having greeted the gathered, President Gurbanguly Berdimuhamedov passes to the site prepared for planting saplings.

Among participants of the tree planting action, there were many youth, which successfully combines their study with labour activity for the benefit of our Fatherland. It is also the result of education of the rising generation in primordial national traditions.

The representative of the younger generation of the country approaches the head of the state. A sonorous voice of a boy welcomes the leader of the nation, wishing health and big successes in his many-sided activity. At the desire of the child, the President of the country starts the tree planting campaigns and plants the first tree - Turkmen juniper that is important in restoration of woods in the mountain regions of our Fatherland.

Here today on 153 hectares of territory and vicinities of the cultural-park complex of Makhtumkuli Fragi more than 61 thousand 200 saplings of juniper "have been planted". Besides the planting of trees, work on care of already available plantings that will allow young trees to get stronger, gain in strength, is also ensured.

It is necessary to note that big preparatory work anticipated the beginning of the tree planting campaigns. For its successful realisation, it was important to provide agro-technical requirements and standards developed on the basis of scientific researches. It is timely clearing and alignment of the areas planned under woods, competent distribution of numbers and exact calculation of quantity of planting of trees, preparation rules of holes, supply of water for the soil in sufficient volume.

… Participants of the present noble action followed the example of the leader of the nation. It is also the feature of national mentality when all undertake a big and necessary business amicably, together.

During the present tree planting action a total of 4 million 248 thousand 740 saplings of trees of coniferous and other species, including 1 million 835 thousand 740 saplings - round Ashkhabad and in its vicinities and 2 million 413 thousand – in regions were planted. By proper care as a whole on the country this day 3 million 590 thousand 740 trees were provided.

Today all world community recognises a powerful contribution of our country to the solution of sharply standing environmental problems and the topical issues of preservation of the environment having a huge value for humanity. It concerns first of all climate changes, careful use of land-water resources, struggle against desertification, preventive maintenance of degradation of land and many other aspects.

President Gurbanguly Berdimuhamedov focused the attention at the meeting of the Cabinet, which took place on November 5, the current year in which he summed up the results of the work of the government for the past ten months, that issues of preservation of the environment are a priority direction of the home and state foreign policy. In this sphere Turkmenistan actively co-operates with the international organisations and acts with concrete initiatives, the Turkmen leader underlined.

Our country is open to cooperation in the field of ecology and climate with authoritative structures. Concerning this theme, the leader of the nation summed up the results of the working visit of the delegation of our country led by Deputy-Chairman of the Cabinet S.Berdimuhamedov to Glasgow (the United Kingdom of Great Britain and Northern Ireland) with a view of participation in the work of the 26th session of the Conference of the Parties of the Frame convention of the United Nations on climate change (COP26).

It is necessary to note that our country undertakes concrete steps on their practical realisation. The big work is conducted in the field of rational use of water, land and biological resources, preservation of biodiversity and natural landscapes, struggle against desertification and disappearance of woods, ecological education of the population. «The Forest Code», Laws of Turkmenistan «On wildlife management», «On especially protected natural territories», «On ozone layer protection», «On fishery and preservation of water biological resources», «On flora», «On fauna» were adopted during the recent years.

On completion of the tree, planting action President Gurbanguly Berdimuhamedov, having warmly said goodbye to its participants, left the territory of tree planting.

This autumn day amicable work was in full swing all over the country: thousand people with huge enthusiasm joined the tree planting campaign. Already today, it is possible to estimate, as our cities have changed, how well arranged became capital suburbs. And if each of Turkmen nationals plants only one tree in the future our fine land will becomes still more beautiful and practically near the desert coniferous and deciduous woods will rustle.

So in the present prosperous period of the powerful state our country thanks to the ecological policy of leader of the nation Gurbanguly Berdimuhamedov turns into the land of generous gardens and fields, expanding the areas of green oases, fine parks and dense woods acting as symbols of its renewal and growth.