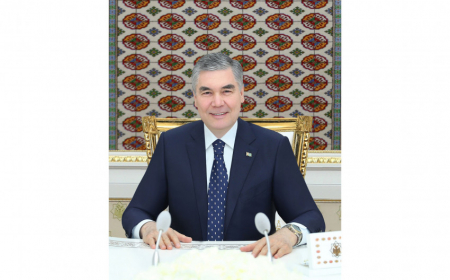 Dear participants of the ceremony!

I sincerely congratulate you on the start of the World Expo 2020, held in Dubai, United Arab Emirates! I wish the organizers and participants of this exposition, grand in scale and significance, great success!

The world exhibition "EXPO-2020" will be held under the motto "Uniting minds, creating the future", which carries a deep ideological message, as it is a call to the members of the world community to consolidate efforts in generating solutions to urgent problems, expanding the range of cooperation and restoring the world economy in the post-pandemic period. Thus, the World Exhibition will become a platform for putting forward specific proposals, which, I am convinced, will arouse great interest and, contributing to the coordination of actions in the near future, will significantly strengthen the constructive dialogue between the states of the planet, as well as global cooperation!

Independent neutral Turkmenistan, focused on full-scale integration into the system of world economic relations, successfully demonstrates its potential at the EXPO exhibition grounds, held under the auspices of the International Bureau of Exhibitions. Modernization of the national economy, diversification of industry, the implementation of socio-economic reforms and the progressive increase in the standard of living of the Turkmen people are the priorities of the state policy of our country, which occupies a worthy position in the rating of intensively developing states.

Therefore, our national pavilion, which is starting to work at the EXPO-2020 World Exhibition under the motto "Turkmenistan - Homeland of Peace and Trust", is assigned a significant role in highlighting the historical path of development of the Motherland and the standard of living of the native people, as well as in raising the image of progressiveness and reliability. A Turkmen state with colossal industrial and intellectual potential.

The theme of our national pavilion is “Turkmenistan - Homeland of Peace and Trust”, which is very symbolic, since at the 73rd session of the UN General Assembly, at the suggestion of our country, the Resolution “2021 - International Year of Peace and Confidence” was adopted. This event became another evidence of the full support of the world community for the steps taken to actively integrate the Motherland into the global political and economic space.

Turkmenistan today celebrates the 30th anniversary of its sacred independence as a dynamically developing state with enormous potential for growth and an active participant in regional and global processes.

Our Motherland has made great strides in the socio-economic sphere, in the rational use of its richest natural resources, in building up its internal potential in harmony with its foreign policy strategy. Thanks to comprehensive and large-scale programs implemented in the era of power and happiness, the independent neutral Turkmen state has turned into a land of prosperity, well-being and happiness. In the future, laying new routes and launching new projects for the further development of our country, we will continue to implement reforms aimed at comprehensively ensuring a high standard of living for the people of Turkmenistan.

Dear participants of the ceremony!

Today, at the EXPO-2020 World Exhibition, organized during the celebration of the 30th anniversary of the sacred independence of Turkmenistan, our national pavilion opens its doors to present to the general public the achievements of the sovereign Motherland in social and economic development, the prosperous and happy life of the people committed to the principles of good nature and peacefulness, and our long-term plans for the future.

Once again, I sincerely congratulate you on the start of the World Expo 2020, organized at a high level in the city of Dubai, United Arab Emirates!

I wish you good health and great success in your work aimed at strengthening friendly and fraternal ties between peoples, developing multilateral trade and economic partnership!