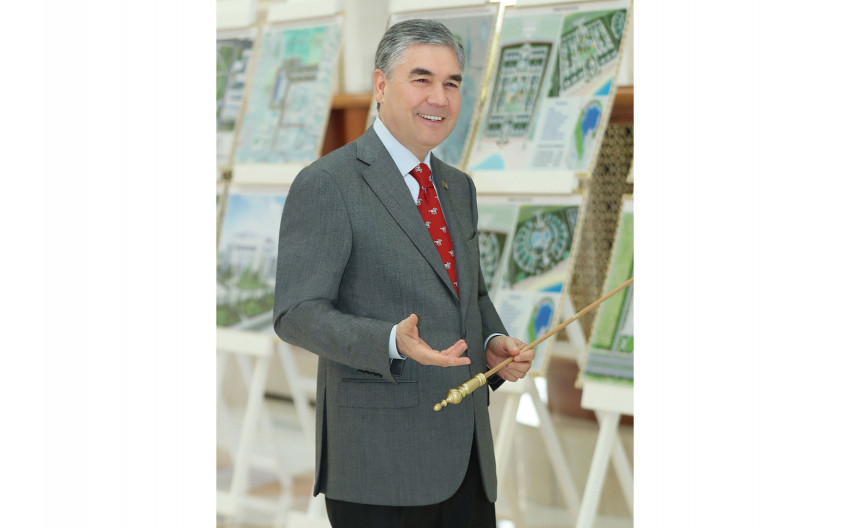 Today, President Gurbanguly Berdimuhamedov got acquainted with projects for the construction of new facilities and structures for various purposes in Ashgabat.

To consider the projects, the head of state arrived at the Ruhyet Palace.

The presentation of projects for the next stage of development in the Turkmen capital, which was attended by the Chairman of the Mejlis and Deputy Chairman of the Khalk Maslakhaty Milli Gengesh, Deputy Chairmen of the Cabinet of Ministers, members of the State Security Council, heads of a number of relevant ministries and sectoral departments, is a significant part of the large-scale work on the comprehensive development of Ashgabat. Today's event was organized on behalf of the head of state, voiced by him during a recent workshop.

In order to further equip the capital and improve its architectural appearance, following the instructions of the head of state, relevant proposals were developed.

In particular, it is planned to erect new buildings of city services at the intersection of S. Turkmenbashi and A. Niyazov avenues. In this regard, the President of the country was presented with the General Plan for the construction of these facilities, drawings of the proposed construction site for this complex, as well as its views from different angles.

It is also planned to construct buildings of the 1st specialized military school named after Berdimuhamed Annayev of the Ministry of Defense along S. Turkmenbashi Avenue.

Then the head of state got acquainted with the plans for the projects of the complex of buildings of the International Scientific and Clinical Center of Physiology, which will be erected on Makhtumkuli Avenue.

Continuing his acquaintance with the projects for the construction of healthcare facilities, the head of Turkmenistan reviewed the outline drawings of the complex of buildings of the International Treatment and Rehabilitation Center, which is planned to be erected along A. Niyazov Avenue.

Having examined these projects, the head of state made several constructive comments and made a number of proposals. These facilities should be built taking into account the most stringent requirements for the construction of healthcare institutions, and equipped with modern high-tech medical equipment, the leader of the nation emphasized, having addressed a number of instructions to the relevant leaders.

President Gurbanguly Berdimuhamedov also got acquainted with the project of the planned construction of a multidisciplinary Center for Creativity and Arts for 10 thousand places in the capital.

Having considered the project, the leader of the nation emphasized that new buildings in the capital should be in harmony with the existing structures, creating a single architectural urban ensemble, which should reflect the peculiarities of the national heritage of our people. At the same time, the head of state ordered to pay special attention to the appropriate organization of the acoustic system of the premises of the creative center, which is important during cultural and other mass events, having addressed instructions to the relevant leaders.

President Gurbanguly Berdimuhamedov also got acquainted with the projects for the construction of a recreation area on the shores of Lake Altyn köl in the northern part of Ashgabat.

The President of the country was also presented a project of a park in the western part of the capital's Bitarap Turkmenistan Avenue.

The leader of the nation was also presented a plan for the construction of residential and social complexes projected along Gurbansoltan eje Avenue.

After examining all the submitted projects, President Gurbanguly Berdimuhamedov made comments on them and made a number of amendments. As the leader of the nation noted, social facilities should differ in their location and design features. The architectural appearance of the structures under construction must fully meet modern requirements and at the same time contain elements of national decor, the head of state said, focusing on the need to take into account all the requirements for the construction of relevant facilities when preparing projects.

The head of state also got acquainted with the project of the International Center of Oncology.

Noting that the Center is very important in protecting people's health, the head of state stressed the need to provide it with advanced medical equipment, giving specific instructions to the Minister of Health and Medical Industry.

The leader of the nation also reviewed the projects of all existing bridges in Ashgabat and proposed for modernization.

As the head of state noted, the most important direction of the innovative urban planning program, along with social facilities, is the construction of road and transport infrastructure facilities, as well as the repair and renovation of existing ones.

As the President of the country emphasized, when implementing the urban planning program, it is important, along with the construction of buildings and structures, to pay attention to their design. Continuing the topic, the leader of the nation noted the need for a special design for bridges under construction and upgrading.

Every year, the wonderful architectural appearance of the capital is replenished with new wonderful buildings, modern parks. They become signs of a new time, symbols of modern history, adornment of the main city of the Motherland, the President of Turkmenistan stated.

After completing his acquaintance with the construction projects of the objects planned in the capital, the head of state reiterated that when implementing the program for the development of the country's main city, the quality of work should meet international standards, and national motives should be widely used in the interior decoration of buildings and their external design. The main requirement is to maintain a healthy ecological environment in and around the capital, President Gurbanguly Berdimuhamedov said and gave specific instructions to the relevant leaders in this regard.